This Case Study deals with the long term performance of SOLOFLO® DRAINIT® Drainage Pipes with an 0.5 mm wedge opening by evaluating in situ pipe deformation, drainage properties and effect on soil layers. The Report describes pipes with an I.D. of 200 mm and 85 mm. Soil samples from around and above the 200 mm pipe were taken in 2010 for a Foundation Indicator Test. Sections of the pipe were exposed for inspection in 2010. The inside of the 200 mm pipe was inspected with a remote control TV camera. One section of the 200 mm pipe was opened for manual inspection.

The Meerlust Wine Estate in the Stellenbosch area of South Africa experienced water ponding and water logged areas in the north west section of the Estate. Unsuccessful attempts were made using “bush drains” / “French drains” consisting of crushed stone without long term success.

The transport of the crushed stone to the water logged areas of the vineyard would have been cumbersome. The drains became ineffective and a more reliable method was sought and the inventor of SOLOFLO® DRAINIT®, the late Mr Tony Kothmann of the Somerset West based company Soloform (Pty) Ltd t/a SOLOFLO® was contacted in 1985 for a solution. In 1985 the SOLOFLO® DRAINIT® wedge pattern drainage pipe system was installed and was placed directly into the 1.2 meter deep trenches without any filter stone or geotextile and the pipe trench was closed up with the previously excavated soil (Fig. 1). SOLOFLO® DRAINIT® has functioned successfully since then and to our knowledge has required no maintenance since 1985.

At the beginning of 2010 Soloflo® became aware of the fact that the section of the vineyard would be re-cultivated in due course and a physical drainage pipe inspection would be possible. The inspection took place in July 2010 around 25 years after the original pipe installation.

The owners of Meerlust Estates have no drawings of the original pipe layout bearing in mind that 25 years had passed. As a first step, ground penetrating radar was deployed to establish the exact position of the main 60 meter long 200 mm drainage pipe and the position of the smaller feeder pipes which were arranged in a herringbone pattern for a large area to be drained. Through the ground radar inspection we established that in total approximately 200 meters of drainage pipe was originally installed at an approximate gradient of 3%. The area which was successfully drained for all these years was around 240 square meters in extent. The entire area was drained toward a solid constructed manhole from where the water was taken away in a solid pipe towards the storm water catchment area and holding dam. Flow measurements after 6mm of rain the night before were taken in the manhole confirmed a water flow of 13 824 liters within a 24 hour period (576 liters per hour).

The second step was to inspect the inside of the 200 mm pipe with a TV camera to obtain information from within the flowing pipe, and also to establish to what extent the smaller feeder pipes discharging into the main drainage pipe were performing. The Cape Town Company RADIODETECTION was commissioned to undertake this task. The TV camera inspection revealed a clean pipe with very little sediment at the bottom of the pipe. The smaller feeder pipes discharged effectively into the main pipe. It was surprising to see the little amount of sediment build up at the bottom of the pipe, and one can assume that the pipe displays a self cleansing effect bearing in mind that the slotted wedge openings are situated at equal distances of 55 mm throughout the entire circumference of the pipe where drainage water can enter the pipe. A further contributing factor is that the inside of the pipe is flush, free of stepped joints or flow hindering connections (Fig. 3). The TV camera could enter the pipe for a distance of 26 meters which was the limit of the inspection capacity.

Interesting to note was that the pipe was deflected downward from the original level where a service road crossed the main pipe. Tractor traffic with trailers would have been the source of this deflection over 25 years bearing in mind that the pipe is situated only 1.2 meter below the surface. The pipe was filled with water and the TV camera followed the deflection to be under water and then climbed out again once the deflection ended. The pipe was open within the deflection with small amounts of sediment including some signs of root growth at the bottom of the pipe. At the downstream sections of the deflection where the pipe was at the original level, small cubical soil deposits of around 5 x 5 cm were visible. At this stage we do not know if soil particles were left in the pipe during construction or if this accumulation of soil particles was formed over all these years. At present this is not of importance to the drain performance of the pipe, but it would be beneficial to know why this was found at the downstream section of the deflected pipe. It also became clear from the TV inspection on the inside of the pipe that the 200 mm diameter round pipe deflected to display a slightly oval shape. We do not feel that this is due to extreme load; the pipe is only covered by approximately 1.2 m of soil, but that this deflection is due to creep over time known to occur in plastic. The pipe is manufactured by injection moulding from high impact A.B.S (Acrylonitrile Butadiene Styrene) and has a good crushing resistance. The wall thickness of the 200mm pipe is 3.0 mm and wall thickness of the smaller feeder pipes are 1.5mm. Joints did not split open due to creep deformation. From retrieved pipe samples we could also establish that environmental stress cracking, common in some plastics, was not noticed. The vertical pipe diameter was reduced on average from 200 mm to 175 mm.

With the help of a small earthworks machine we removed the soil to a depth of approximately 800 mm and carefully handtool excavated to the top of the pipe to avoid damage. The 200 mm main drainage pipe was exposed at two different places, namely 15 meters and 45 meters from the manhole exit. We did not deem it necessary to excavate towards the smaller free flowing pipes. Soil samples were taken from above the pipe, namely 80 mm and 800 mm away from the pipe. Four samples were taken in total – two at each location. No free water was present around the pipe. On average the pipe was covered by a mixture of soil consisting of 5 – 10% clay, 10 – 20% silt, 37-45 % sand and 34-41% gravel and a plasticity index of between 9 and 11.

A further pipe section was exposed approximately 50 meters away from the manhole for the purpose of opening the top of the pipe to retrieve A.B.S samples and to inspect the inside of the pipe manually. The small pieces of soil visible in the picture of the opened up pipe are soil particles which fell into the pipe when it was opened (Fig. 2). The water level and the inner wedge slot opening can be clearly seen (Fig. 3). Small root growth visible in the pipe was only noticed in 2 or 3 places. No root growth network was present in the pipe.

We may point out that the night before we excavated towards the pipe there was 6 mm of rainfall. This moisture is clearly seen in the picture still contained in the upper level of the soil above the pipe and still in the process of migration towards the drainage pipe. The area around the pipe was free of standing water (Fig. 2). Therefore, one can assume that the drainage process is a slow ongoing process and not a quick rapid drainage process. The drainage process is influenced by the permeability of the soil. When the pipe was installed in 1985 the trench was excavated, the pipe placed and the trench backfilled with the previously excavated material without the addition of any natural drainage materials such as stone or any artificial geosynthetic materials (Fig. 1). Unfortunately no soil samples were taken for testing in 1985 that we know of. The advice and prediction given by the late Mr Tony Kothmann, the inventor of SOLOFLO®, that the DRAINIT® pipe will perform under the existing site conditions has clearly been confirmed.

The soil test report from 2010 indicates that there is a slightly higher clay and silt content closer to the pipe (80 mm) than further away (800 mm). Migration of fine particles towards the pipe over time and removal through the wedge slit opening is a possible explanation for this.

It is seldom that such long-term use history projects are available for inspection. What has been confirmed is that SOLOFLO® DRAINIT® wedge slot opening drainage pipes work efficiently to drain subsoil over the long term. This has to be noted and is confirmed by performance on many other projects of a similar nature. Hundreds of papers have been written about drainage pipes, filters and associated geosynthetic textile clogging problems. Stone drainage layers are not necessarily “GREEN”. Stone crushing and transport add up to negative environmental influences and considerable costs. There are many applications where a more progressive approach and a move away from an “inherited cut and paste” solution will lead to improved, functional, cost effective drainage solutions. 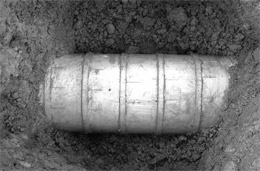 Fig. 1 - No Filter Stone, No Geotextile 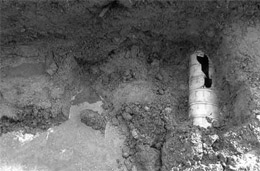 Fig. 2 - No Standing Water Around Pipe 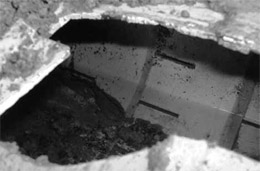 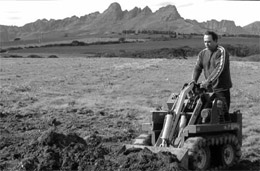